Minute To Win It Cocktail Challenge

Beach and Bush’s Minute To Win It Cocktail Challenge team build is a fantastic alternate to physical team building and a sure way to get the party started. A low impact challenging event based on the popular TV series of the same name. Hilarious tasks await contestants as they compete head to head for their team. 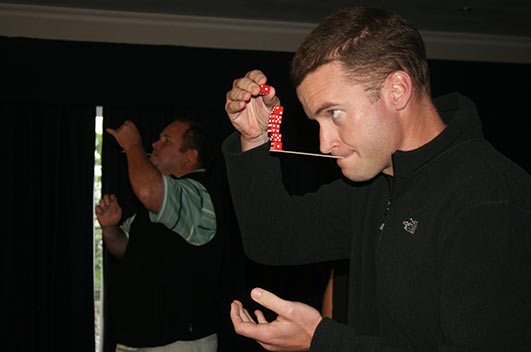 Participants spend time in groups completing low-impact / mentally challenging tasks in a set time limit as per the popular television show. They then end off by creating unique cocktails which are graded and presented to the group.

A stage is set up for the event and teams face off as they watch the show unfold before them.

The set-up is entirely professional with audio visual support including large screen blue-prints, music and countdown timer. Some of the popular task blueprints include:

The first stage consists of groups competing directly across a series of classic ‘Minute 2 Winit! puzzles and tasks.

Beach and Bush’s ‘Minute To Win It’ Challenge team build

The first stage consists of groups competing directly across a series of classic ‘Minute To Win It! puzzles and tasks.

Using only the face, move cookies from the forehead to the mouth.

With a pedometer attached to the forehead, move the head around to record 125 total “steps” in a minute.

Knock over empty cans using a yo-yo tied to the back of the waist.

Player must shoot rubber bands to knock a triangle stack of 6 cans completely off a platform.

Incrementally build a wobbly tower of cups and ping pong balls by bouncing a ball off the ground into a growing stack of cups held in the hand.

Stack 5 wooden baby blocks on top of plastic plate balanced on top of the head.

Stand 20 empty CD cases on a table in a horseshoe formation. Set them off using a domino effect around a designated spot and so that the final case falls off the table.

Stack 3 golf balls 1 atop the other.

Balance six dice on a popsicle stick held in your mouth. clenched jaw and ninja like focus.

Groups are then scored and access to a wide range of cocktail mixing ingredients, garnishes etc are dependent on the score attained.

Using limited resources, teams must then mix up a storm to create the ultimate cocktail.

Teams present their cocktails to the panel in front of the entire group and our experienced judges sample and rate the creations, often a hilarious undertaking!

All team members then have access to the bar to mix additional cocktails, a great party starter.

At the end each group must present their cocktails and explain them, they are judged and the cocktail champions are announced.

WE VALUE YOUR FEEDBACK…

Kaylene Baker
recommends
Thank you to Beach and Bush Team Building for a wonderful innovative virtual session. It was loads of fun, LOTS of laughs had

Pamela Solomon
recommends
Spectacular team with innovative and impactful virtual Team-build strategies. I had an extremely seamless experience from start to finish, and everything was curated specifically for a very diverse and cosmopolitan crowd. Thank you BB Team, we will be back!

Kimberly Knight
recommends
Massive thank you to Beach and Bush for helping the Channel Reach team come together virtually! ????‍????????‍???? We all had SO much fun and laughed a lot - these virtual team building sessions are so important in these trying times! Chad and GK were the best facilitators. ???? Will definitely book more virtual team building sessions in the future.

Kirsty de Beer
recommends
Beach and Bush facilitated such a fun and interactive team building for our sales team. Our team had the best time with tons of laughs in-between. The facilitators ensured they got all the team members involved and were so accommodating and friendly. Thanks guys!

Jenny Poate
recommends
A huge thank you to the Team for an awesome Team Building. We were a big group and you handled it so professionally. Everyone loved it! I would definitely recommend that teams try the Cyber CSI, it is SO much fun. Thanks to you all. Jenny Poate.

Brenda Van Heerden Lochner
recommends
Thank you GK and Chad for a fun, interactive and well-organised remote RECONNECT event today!! Our team thoroughly enjoyed the different activities and even the shyest amongst us got up and danced! ???? We can't wait to do this again ????
Facebook-f Youtube Instagram Linkedin-in
Get a Free Quote